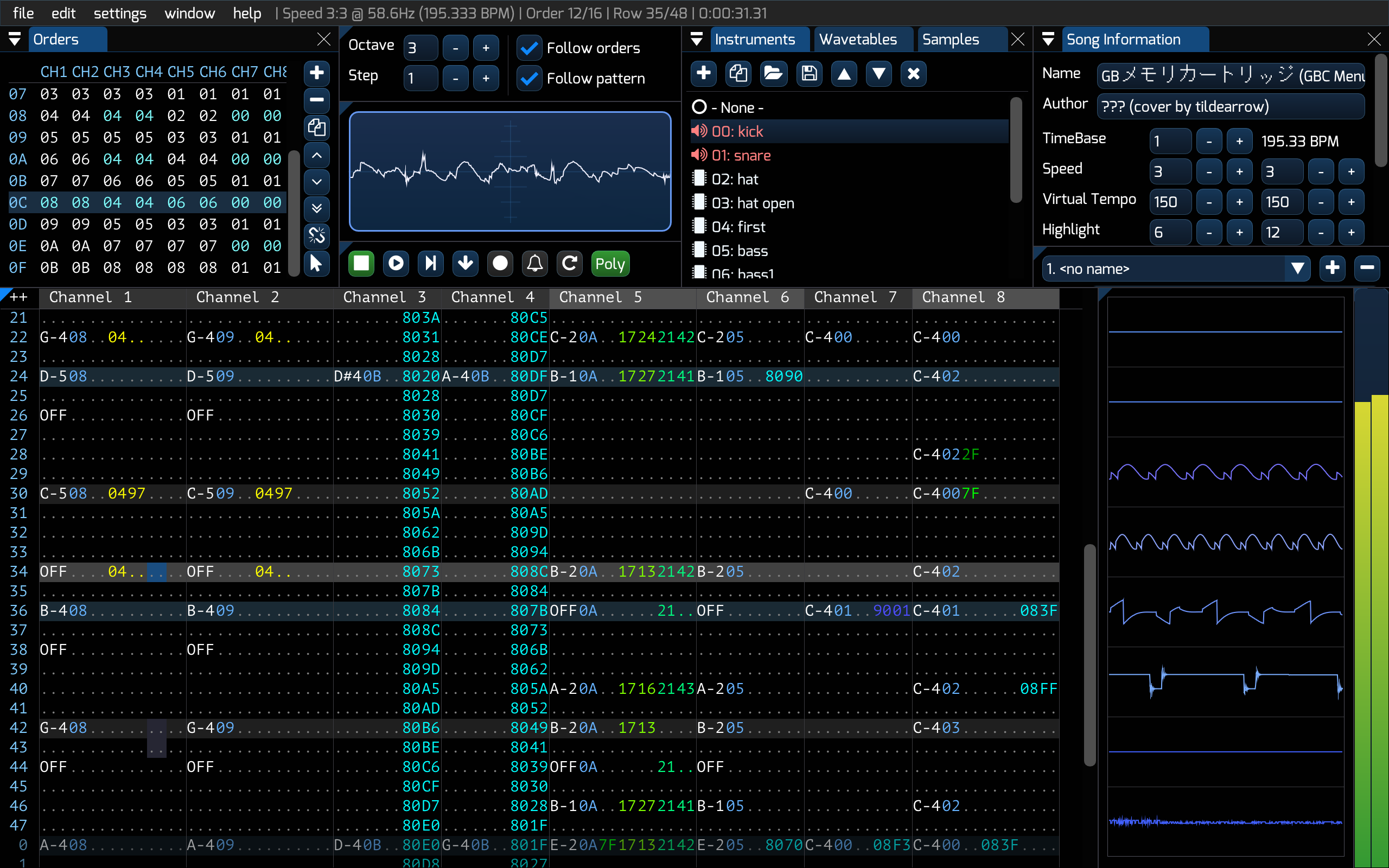 the biggest multi-system chiptune tracker ever made!

check out the Releases page. available for Windows, macOS and Linux (AppImage).

some people have provided packages for Unix/Unix-like distributions. here's a list.

if you can't download these artifacts (because GitHub requires you to be logged in), go here instead.

NOTE: do not download the project's source as a .zip or .tar.gz as these do not include the project's submodules which are necessary to proceed with building. please instead use Git as shown below.

if building under Windows or macOS, no additional dependencies are required. otherwise, you may also need the following:

some Linux distributions (e.g. Ubuntu or openSUSE) will require you to install the -dev versions of these.

type the following on a terminal/console: (make sure Git is installed)

(the --recursive parameter ensures submodules are fetched as well)

as of now tildearrow uses MinGW for Windows builds, but thanks to OPNA2608 this works again!

from the developer tools command prompt:

Alternatively, build scripts are provided in the scripts/ folder in the root of the repository.

this opens the program.

this will play a compatible file.

this will play a compatible file and enable the commands view.

note that these commands only actually work in Linux environments. on other command lines, such as Windows' Command Prompt, or MacOS Terminal, it may not work correctly.

see papers/. it's kind of incomplete, but at least the systems (sound chips) section is there.

it doesn't open under macOS!

this is due to Apple's application signing policy. a workaround is to right click on the Furnace app icon and select Open.

how do I use C64 absolute filter/duty?

on Instrument Editor in the C64 tab there are two options to toggle these. also provided are two effects:

how do I use PCM on a PCM-capable system?

my .dmf song sounds very odd at a certain point

file a bug report. use the Issues page. it's probably another playback inaccuracy.

my .dmf song sounds correct, but it doesn't in DefleMask

file a bug report here. it still is a playback inaccuracy.

my song sounds terrible after saving as .dmf!

the DefleMask format has several limitations. save in Furnace song format instead (.fur).

how do I solo channels?

This program is free software; you can redistribute it and/or modify it under the terms of the GNU General Public License as published by the Free Software Foundation; either version 2 of the License, or (at your option) any later version.

This program is distributed in the hope that it will be useful, but WITHOUT ANY WARRANTY; without even the implied warranty of MERCHANTABILITY or FITNESS FOR A PARTICULAR PURPOSE. See the GNU General Public License for more details.

You should have received a copy of the GNU General Public License along with this program; if not, write to the Free Software Foundation, Inc., 51 Franklin Street, Fifth Floor, Boston, MA 02110-1301 USA.

despite the fact this program works with the .dmf file format, it is NOT affiliated with Delek or DefleMask in any way, nor it is a replacement for the original program.